A few weeks ago our store cat, Morty, became ill. He quickly lost about 25 percent of his body weight. We noticed he was acting strange and took him to the vet.

Pressure had built up in his right eye and he could no longer see out of it. The vets were able to relieve the pressure to make him more comfortable. It was unclear at that time what was going on. A couple of days later he lost the sight in his other eye. His kidneys were rapidly failing and he was in pain.

We made the decision that all pet owners dread. We had him put down to spare him from further pain.

Morty had a great run. He passed at age 15. His reputation for not always being a nice cat was well earned. It actually drew a large following of humans amused by his grumpy attitude. In his prime, he would bait young children in close by being sweet, just to bite them. Mind you, not hard enough to break the skin, but enough to elicit a satisfying scream from the child.

Morty’s behavior was almost always followed by a parent admonishing the child that not every animal is friendly. Morty always seemed to smile after such a warning. Many have commented that we must be looking for a nice, well-mannered cat to replace Morty. On the contrary. A nice, well mannered cat would never survive the rigors of living in a pet store. People, dogs, activity, and, of course, children are a lot to handle.

We’re seeking a cat with a bit of an attitude—a cat that knows how to set some limits. It the only way he or she will make it. So keep watching. Stop in, we are looking for the perfect cat to join our band of misfits. We will keep you posted.

There is a cat in a rescue somewhere just waiting to join the fun. 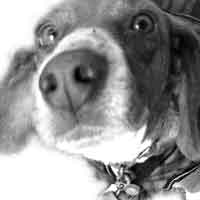