One of my favorite quotes is from Nelson Mandela, who said “Education is the most powerful weapon to change the world.”

As a police department, we’re always educating ourselves and altering how we do things based on data, new case law and best practices. Training has been a priority of our department since I became Chief of Police in 2012. It is also one of the six pillars of effective law enforcement agencies emphasized by the Task Force on 21st Century Policing established by former President Obama in 2014.

Our officers regularly train on de-escalation tactics, mental health awareness, crisis intervention, new case law, accountability, and implicit and explicit bias, among many other topics. We even built a defensive tactics and training room in 2016 to enhance our training program with an emphasis on de-escalation, less lethal use of force options and injury reduction.

As recent events have shown, not all departments commit to the same level of continuous improvement. While some departments still allow their officers to use choke holds, ours banned them decades ago unless deadly force is warranted. While some departments lack comprehensive reporting protocol for incidents involving force, ours has well-documented procedures for reporting, review and oversight.

I bring up these differences between departments because people throughout the country are talking about police reform. I will eagerly take part in conversations aimed at making policing better, but I also want to educate our residents that through our accreditation process and emphasis on continuous improvement, we’ve done a lot of the work already. Before we can talk about what needs to change locally, I believe our residents need to know where we stand currently.

We’ve added a new Police Policy page on our website – www.naperville.il.us/policepolicy – where residents can learn more about how the Naperville Police Department operates, particularly with regard to use of force. You’ll find a copy of our Response to Resistance policy (formerly called a Use of Force policy until we changed it in 2016 to more accurately describe our approach to policing) as well as examples of how our current policies measure up to some of the police reform campaigns that are being discussed nationally.

You’ll see that in many respects, the Naperville Police Department is setting the bar, not reaching for it.

As a department committed to continuous improvement, we realize that our education is never complete. We regularly debrief incidents, review policies and provide additional training in the interest of improving our service to the community. To that end, I promise to continue to listen, learn and be an active participant in conversations aimed at making policing better.

I’m hopeful that this new webpage will educate our residents about the current policies and practices in our department and set the groundwork for future conversations about policing in Naperville. 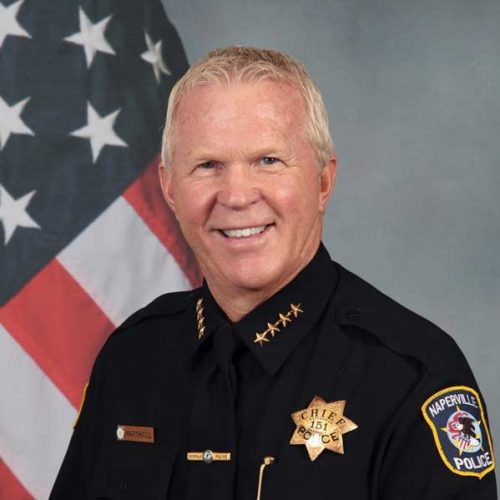 Robert W. Marshallhttps://www.naperville.il.us/services/naperville-police-department/office-of-the-chief-of-police/
Robert Marshall has been serving as the Naperville Chief of Police since 2012 with a simple mission – to serve and protect the people of Naperville.

PN Editor - Wednesday, June 29, 2022
Above / The Naperville Municipal Band is always triumphant on Thursday nights! And especially during the concert when Tchaikovsky's "1812 Overture" is performed at...