Above / Naperville Heritage Society received a grant to support photographer, Wing Young Huie, in a Naper Settlement exhibition and lecture demonstrating the vitality of Naperville’s Asian communities. Pictured is Huie holding his first published article for Lake Superior Port Cities Magazine, in which he wrote about and photographed his father.

Naperville, IL – The Naperville Heritage Society, administrator of Naper Settlement, has been awarded a $10,000 grant from the National Endowment for the Arts (NEA) to support its exhibit Community Reflections through the Lens of Wing Young Huie, a project that will feature a photography exhibit and lecture by noted author, artist and lecturer Wing Young Huie. This exhibit will reflect Naperville’s changing demographics during the late 20th and early 21st centuries, and will explore and recognize the vitality of the City’s growing Asian community.

“The National Endowment for the Arts is proud to support the excellence and diversity of arts programs across the country, including organizations like Naper Settlement, that make the arts accessible to people in Naperville and further enhances the vitality of their community,” said NEA Chairman Jane Chu.

For over 30 years, Minnesota artist, Wing Young Huie, has used photography to capture the complex cultural realities of American Society and explore identity, often using themes of immigration, race, and religion in diverse communities. In November, Wing Young Huie will spend a week photographing Naperville residents who are part of the city’s Asian community. Wing will also present a lecture to talk about his artistic process and share how his photographs give voice to individuals and map the cultural context of the nation’s Asian communities.

Wing Young Huie’s current project is Chinese-ness a four-year project that will be published by the Minnesota Historical Society Press in fall 2018. The project provides photographic answers to such questions as: Is Chinese identity personal, cultural, national, political and/or imposed? Wing is “excited to photograph the Asian Diaspora in the Naperville area,” and continue his life-long exploration of “how Asian-ness and American-ness intertwine and collide.”

“Wing is the perfect artist to document Naperville’s residents at this moment in time,” said Naper Settlement’s Vice President for Community and Engagement and Audience, Donna Sack. “Each portrait will include artifacts of special significance to the holder, which makes such timeless connection to how Naper Settlement exhibits the community’s collections from past and present Napervillians. The team at Naper Settlement is excited to be working with him on this artist-curated public exhibition. ”

Making up 20 percent of Naperville residents, the Asian community is the fastest growing ethnic population in the City. This population shift began with Naperville’s emergence in the 1960s and 1970s, as what some scholars have referred to as a “technoburb.” Local company’s recruited Indian and Chinese engineers, scientists, IT specialists, lab technicians and medical researchers, among other highly qualified and educated employees. This shift in racial diversity, plus the creation of the technical corridor along Interstate 88, transformed Naperville from the small farming community west of Chicago into a technoburb.

Nancy Chen and her family moved to Naperville in the early 1970s, when her husband William took a position at Argonne National Laboratory. She has memories of hosting all of Naperville’s 10 Chinese families in her home to celebrate the Chinese New Year. Now, she says, “It would take a banquet hall to fit everyone! This project means a lot to me. I look forward to working with Naper Settlement on this exciting and meaningful endeavor.”

Anurag Tandon moved his family from Michigan to Naperville in 2010 with his wife Shikha Tandon, and their twins, Shania and Rianna. Their grandfather, Amir Chand Tandon, who was born in India and immigrated to the United States, often visits and spends the summer with the family in Naperville. The Tandons are looking forward to sharing their family story, which will include an oral history component along with the entire family sitting for Wing’s photograph.

“I was born in the United States, and my daughters are 2nd generation Americans,” said Tandon. “My father went to college here in the Midwest and made a wonderful life for our family and future generations. My girls are excited about their upcoming trip to Naper Settlement to participate in the Living History program.”

“This is the beauty of getting to share Naperville’s history,” said Sack. “You get to meet so many wonderful people who have dynamic stories that link our present to our past and our past to our present. I cannot wait for the Tandon girls to be part of another generation of fourth grade students that visit the museum.”

Naper Settlement’s staff, skilled in community stories, public engagement, exhibitions and history, will partner collaboratively with Wing by identifying photography subjects, handling photo-shoot logistics and working with him on the photography exhibition. There will be an open-call photography day held on Saturday, November 18.  Check back soon for more information on the Naper Settlement website.

This project is part of Naper Settlement’s Naperville Memory Project Asian Collecting Initiative. This NEA grant compliments a grant received by the Naperville Heritage Society earlier this year from the National Endowment for the Humanities: Exploring the Human Endeavor for Embracing Community Change: Naperville’s Contemporary Immigrant Story. Both grants help the museum’s initiative in collecting and preserving the history of Naperville’s 20th and 21st century Asian communities.

Naper Settlement is a nationally accredited, award-winning outdoor museum set on 12 magnificent acres in the heart of Naperville, where history comes to play and community comes to connect. The Naperville Heritage Society is the administrator of Naper Settlement. With a commitment to the community and a focus to the future, the mission of the Naperville Heritage Society is to collect, document, preserve and support the history of Naperville, Illinois, past and present. For more information, visit napersettlement.org or call (630) 420-6010.

National Endowment for the Arts

The NEA is the federal agency that supports and funds the arts to give all Americans the opportunity to experience creativity and participate in the arts. NEA programs and funding support thousands of activities in communities large and small across the country. To learn more about the National Endowment for the Arts, please visit arts.gov.

Story and photo submitted by Emma Vodick for Naper Settlement. 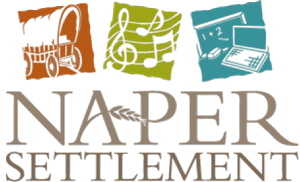