Does Naperville care about protecting one of its most important buildings? We’ll find out soon, when the City Council decides whether to allow a developer to destroy the old Nichols Library, which has graced Washington Street for more than a century.

Some say it would be unfair to landmark the building now. They say the current owner should be able to do whatever he wants, even destroying the building while claiming to protect remnants of its facade. They say property rights must be preserved.

True, to a point, though a protective covenant was placed on the Old Nichols Library property upon its sale to Trinity Lutheran Church back in 1996. Now, with recommendation by the Historic Preservation Commission to landmark the building, City Council must decide what to do.

The City Council is charged with doing what is best for the community, all 147,000 of us. And part of that job is protecting irreplaceable cultural assets. This does not have to be an “either…or” thing, as frequently claimed. Historic preservation is good for communities and can enhance local economies.

As one preservation supporter noted recently, people don’t visit places to see how nice the Banana Republic store looks. They visit downtown Naperville largely because of the way it looks. It’s charming. It offers a balance of old and new. The old library, with its prominent location, contributes to that hard-to-define-but-once-it’s-gone-you-miss-it ambiance.

Of course the library should have been landmarked years ago, and the City probably should not have sold it. But it’s an important part of a longstanding National Register of Historic Places District. And when they sold the building, the City Council wisely included a covenant protecting the front façade and original entry foyer. Mr. Avram knew about the covenant and historic district when he bought the building. If both the City and the owner want to break the covenant, their sharp lawyers can probably figure out a way to do it, but just because something is legal doesn’t make it right.

If the government took away all potential to redevelop the library, that would be an illegal taking. But it’s possible to protect the building without depriving the owner of all development rights. With cooperation from City Hall, the old Nichols Library would be ideal for an “adaptive re-use,” meaning a new use for an old building. Nearby examples abound:

Too much attention is being paid to whether Old Nichols should be landmarked. Despite the developer’s claims, landmarked buildings can be altered – even demolished – with Council approval. More than a decade ago something similar happened with the Clow farmstead house. The locally-designated landmark was on 104th St., but the City allowed it to be replaced with a shopping center. The house would have been destroyed, but The Conservation Foundation saved the day when it agreed to dismantle the building, then rebuild on its property a few miles away.

Naperville put considerable effort into updating its historic preservation ordinance several years earlier, along with design guidelines for its local historic district. In addition, as outgrowth of Naperville’s Downtown 2030 Plan, the City supported Downtown Design Standards for redevelopment. It appears that Mr. Avram did not employ the considerations offered in these standards.

As this is being written in late August, we don’t yet know whether the City Council will accept the Historic Preservation Commission’s recommendation to landmark the building. Nor do we know whether the City Council will grant the variance requested to build an expanded version of the building. The planner term for this is floor area ratio, and this issue might be more important than the landmarking designation, because the current plan falls apart without the variance.

Mayor Steve Chirico has a talent for coming up with creative solutions to difficult problems, so let’s hope the City Council approves the landmark designation and denies the variance needed for the silly plan now on the table. Then the mayor can work with the current developer or another one to come up with a plan to save the library while redeveloping it and the adjacent properties – the YMCA and the bank at the northeast corner of Washington and Jefferson – if they become available.

If this means the City must purchase the property, then wait until the right deal evolves, so be it. Then City leaders can sell the property to a private developer, proud of the fact that they have saved the library for future generations to enjoy while supporting redevelopment and economic benefits it can bring. 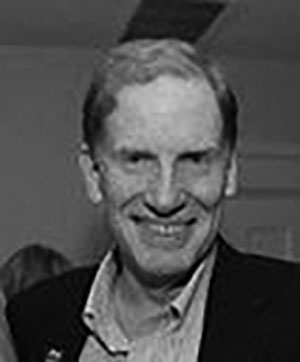 Joe McElroy
Joe McElroy is a Naperville-based public policy communications consultant. He has worked on historic preservation in Chicago, Naperville, Yorkville, Aurora and other communities. He served on the City Council and was vice chairman of the Plan Commission.